In a house in the Vila Olímpica of Barcelona 92′, the reform of the day area of the house was requested. All the partition walls were demolished, incorporating a room and the kitchen that were segregated, in such a way that a larger and more unified space was obtained, which would be occupied with a compositional strategy based on the repetition of a fundamental constructive element: the 4cm oak wood strip.

From the repetition of wood strips, arranged vertically or horizontally, a new layout is shaped, structured in a series of volumes that contain the server elements (the kitchen bars, the cupboards and the book shelves) and articulate an open space, where crossed visuals are generated, natural light and ventilation are reinforced, and where the layout of the new L-shaped kitchen plays a special role, allowing it to be integrated by shaping an area for the dining table while maintaining a view through its bar towards the exterior.

The repetition of the wooden slats, the different depths they take or the distance between them, shapes an atmosphere marked by the accentuation of the vertical and horizontal dimensions, by the transparencies, and by the warmth of the wood, which contrasts with the white colour of the walls and ceiling that serve as a backdrop. 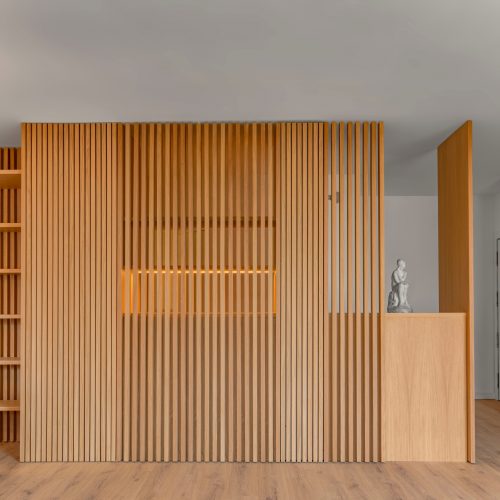 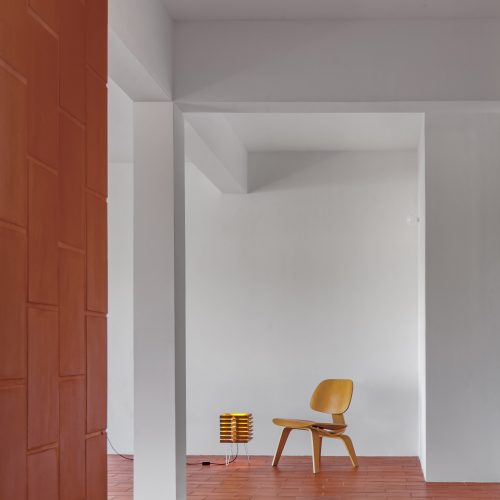